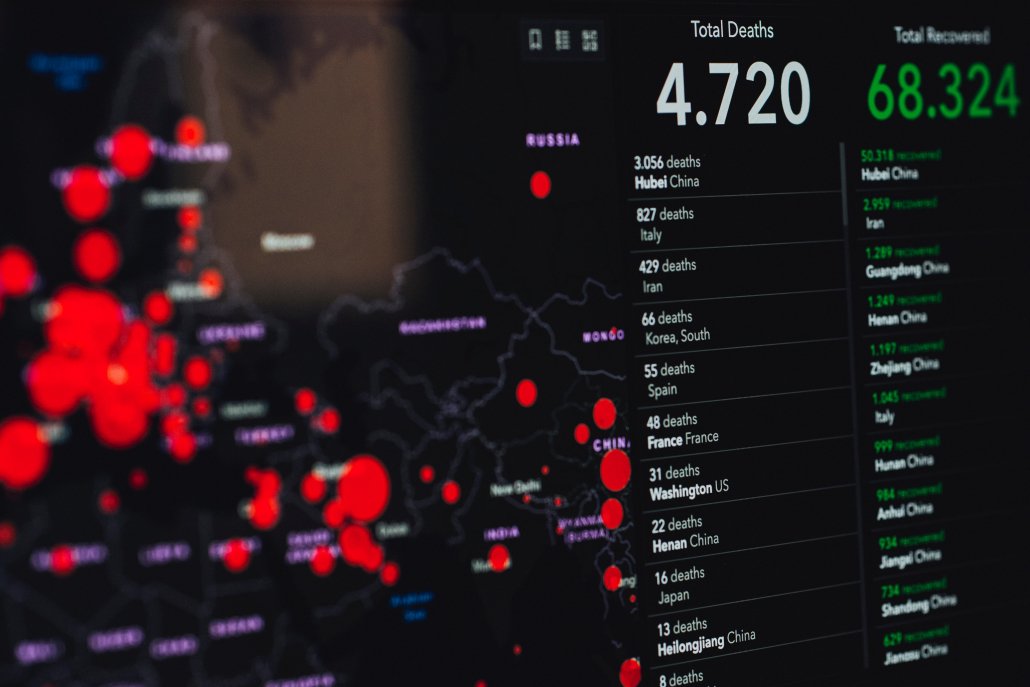 Faint not nor fear, but go out to the storm and the action, trusting in God whose commandment you faithfully follow; freedom, exultant, will welcome your spirit with joy.

— Dietrich Bonhoeffer
“Stations on the Road to Freedom”

In other words, fear God and become fearless. Nothing in heaven or earth or hell can scare you then.

“For in Christ Jesus neither viruses nor politics counts for anything, but only faith working through love.”

COVID provided perfect conditions to address the evil of living in fear, an evil that has played out over the last few months. 2020 was a year of fear unlike anything I have known in 66 years of life. In reviewing the habits formed during COVID, I want to address not living by fear.

Early COVID and the Rise of Anxious Fear

Traveling to Serbia in early March was unlike any of my previous nine trips in the last 4 years. Airports were less crowded. Face masks appeared everywhere. Passengers were tense. One man a few rows behind us kept coughing rather loudly.  This is a normal part of flying. What was not normal was this: after ten minutes of this, another passenger stood up to call him out, yelling, “Cover your mouth! Remember the Coronavirus!”

News from Italy, Spain and Death

Within a day of our arrival in Belgrade, various public health organizations said we were now in a pandemic. The novel virus was on the run. Pandemic was a new concept to most of us.  Few people have books about plagues and epidemics on their bedside table. None of us knew a thing about the great pandemic of 1918.

Then news arrived of the wave of deaths in Italy and Spain. European nations began to close their borders. In short order, the EU became “every nation for itself.”

Our classes continued. There was hand sanitizer everywhere. 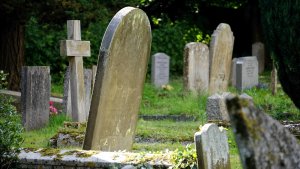 In a matter of less than 7 days, our context changed dramatically. We cancelled further travel plans. We spent hours and hours on the phone getting a flight home. Conversations became obsessed with the virus. People began to live in fear of infection and death. Airports increased security.

Toilet Paper and Grasping for Security?

God gave us a flight home. It was nearly empty. We decided to self-quarantine for 14 days.  Friends back in Tucson offered to get us groceries to be ready for our return. But, they assured us, forget it if you need toilet paper.  To confirm this they sent pictures of empty shelves which had once been filled with it.

Really? Toilet paper hoarding as a first response to a pandemic? Not canned goods? Not food staples? I guessed the threat of diarrhea was greater than the threat of starvation. 😉

Politics, Media, and the Exploitation of Fear

Everything is about politics these days. It is a dark shadow that has come across the land. 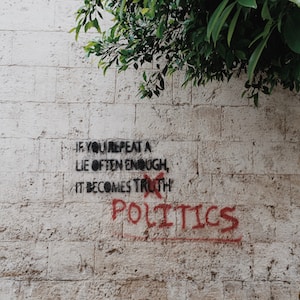 Photo by Brian Wertheim on Unsplash

Sitting at home, following the news, and reading reports of epidemiologists it was clear that the domination of politics was greater than I had imagined.

Leaders, rather than working together to serve all of us, decided this was a moment to be exploited. Their media advocates joined forces with them. The war of right versus left took on new energy. Assertions were met with counter assertions and “whataboutism.” Scientists became partisan. Statistics were bandied about without context, or wise interpretation.

I believe that the leadership of our government, from local to national, from the President to Congress, from the experts in the bureaucracy to the public health policies failed us miserably. They were more interested in winning than serving.

That stirred anger 1 in addition to fear. Distrust was on the rise. 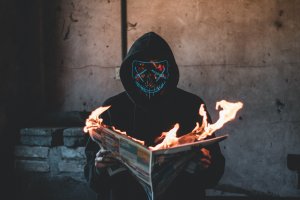 Protests, Cancellations, and the Fear of Tyranny

Then came the protests. Viral footage of the death of George Floyd ignited the smoldering kindling of anger and fear.  Media and politicians once again exploited the protests and violence for their own ends. They could not pass up an opportunity to galvanize their political base!

After that came cancellations — the despicable act of cowards and bullies to silence anyone who dares to disagree with them. Some wondered if we were on the border of tyranny, from the right or the left.

In a few short months, FIRE (the leading group defending the 1st amendment on University campuses) took on more cases regarding the suppression of freedom of speech for faculty and students than at any time in their history.

There were lots of reasons to fear. Pandemic, politics, and the threat of tyranny (silencing those who disagree).

My own reflections brought me to a question early on: Would I live in fear? (this is similar to the question about anger)

To live in fear meant every movement of my life, every conversation, every step into the public would be aimed at protection and preservation. If I gave in to fear, it would control my life as a father, husband, pastor, neighbor, and citizen.

What was I to do?

One option was to answer fear with stupid. Stupid means denying the pandemic, minimizing the dangers and threats, taking no precautions because “I am tough, I can handle it” or “I am safe, I can deny it.”

In the same stupid category would be aligning myself with a political interpretation of a medical issue.

Joining in the Fear-Mongering

Another option was to participate in the fear machine. 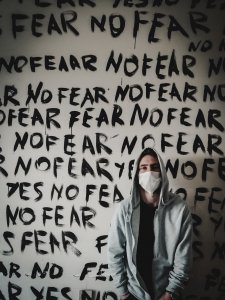 People I knew seemed caught up in the fear. Those on the political right were afraid of tyranny, those of the left were afraid of Trump. Everyone projected the worst possible future if the cause of their fear was not addressed.

Not Living in Fear

My wife and I read a fabulous book during this time: The Splendid and the Vile. Erik Larson tells the story of Churchill’s leadership of Britain when it was Britain alone against the Nazi’s, when Britain had few defenses against the nightly bombings.

Imagine an entire 12 months in which on any evening you may be awakened by air-raid sirens calling you to flee to a shelter. How would you respond? How would you lead?

Churchill was candid about the danger, but resolutely called people not to live in fear.

Living In Fear is Not an Option

More than once in my years of ministry I have said to people, I do not believe God speaks with a voice of fear.

To live in fear is to seek control of circumstances.

To live in fear is to become self-focused. Toilet paper hoarders lived in fear.

To live in fear kills love and eliminates service to others. 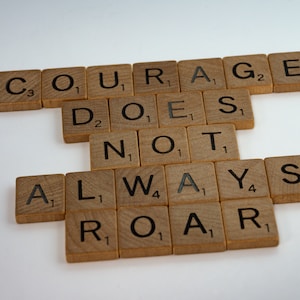 Photo by Brett Jordan on Unsplash

Google has created the massive delusion that I can be an expert on everything. Speaking as someone who is something of an expert on Scripture and theology, I can assure you that is a lie. Some of the most inane theological assertions I have heard have come from self-taught googlers. Friends in the medical world speak of the difficulty of treating patients who have spent an hour on WebMD and think their research is sufficient for good treatment.

Not living in fear means I would seek to act wisely. We spoke with trusted people who know virology, epidemiology, first amendment law, and those who are charged with determining cause of death. I am amazed at how few people have actually talked to their own doctor about this situation. I do not think following articles online is wisdom. I need conversation with competent people.

Our conclusion from these conversations: It seemed obvious that a new virus had entered the eco-system, that it was here to stay, and that it was more lethal than the flu.

When I get into my vehicle, I put on a seat belt. Why? As a precaution.

When I use the restroom, I wash my hands. Why? As a precaution.

When a new virus emerges, I seek to mitigate its spread and prevent my own infection. How is this thing caught? How does it spread? Our reliable experts gave us valuable input and we follow their guidance.

We will get the vaccine, not because it is without risk, but because we think it is a wise precaution.

Not taking precautions is not trusting God. It is presumption.

Trusting God means I take precautions, then I step into life as much as I can — to serve, to love, to support the people around me.

There are no safe places in my life. Risks surround me. Some of them are small and some are large. After being broadsided last week, I was reminded of one of those risks. 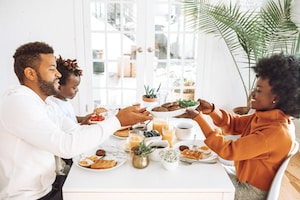 Photo by Jimmy Dean on Unsplash

God did not make us to live in isolation. Zoom is a poor substitute for eye contact and real presence. We need each other. We decided to have people over, two at a time at most. We did so in a safe way. We sat outside (someone we know sits outside in Minneapolis in the winter around a fire pit). I watched a high risk older couple open their patio every week to widows and lonely people.

Fear isolates. Love moves us toward community. Love looks for ways to be with others even with caution.

There have been some great examples of Christians and churches loving others. On the other hand, there are also examples of the same groups seemingly most concerned with their own rights and needs.  When people resist a public health measure, and insist they get their way, they are making their rights the center of their lives.

When someone outside of Christ sees a church bringing food to those who lost jobs they see selflessness. When they see a church defy orders, insist on their right to worship, and make statements about the pandemic, they hear selfishness. It sounds to them like we don’t care about them. We only care about ourselves.

I would rather take the risk of loving others with wisdom than hole up at home in fearful isolation.

I would rather take the risk of serving others than engage all my energy to keep my life safe and my freedoms intact. 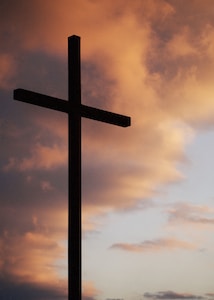 Photo by Aaron Burden on Unsplash

The One Who Risked All to Serve

All of this is grounded in the Savior who came not to be served but to serve and to give his life a ransom for many. He faced many temptations to fear. There really were people out to destroy him. He lived under Roman oppression too.

But he trusted his Father and went about doing good. He loved, making himself vulnerable to those who wanted to kill him. And they did.

He did not hole himself up in some cave near the Dead Sea. He spent every day among the broken and diseased.

In the end, he gave up his right to a fair trial, submitted to gross injustice, and was murdered. This was for us and for our salvation. By his death for sin, he broke the power of sin and death.

Being his, I have absolutely no reason to be controlled by fear. He has secured my eternal joy with him. Christians, above all other people, ought to seek wisdom, live with wise precautions, and trust God so that they are free to serve and love.

Incitement or Civility?
Scroll to top